How many drinks can I have?

Slovenians have earned the 25th place among 186 world countries with more than 11 litres of pure alcohol consumed per person per year (WHO, 2012). As reasons for alcohol consumption, we list “special occasions”, which simply never end. It starts with birthdays, child births, continues with holidays such as Christmas, New Year, St Martin's Day, and is followed by special occasions and events. The list is rounded off by drinking just because we are among good friends. There is a common belief that there is no good party or event without alcohol.

But is it really necessary?

I am sure many will not agree with me, but I believe that Slovenians are very similar to white “curly” four-legged animals grazing in the meadows. It starts very early, somewhere at 15 years of age, when young people start to party at weekends. The group quickly excludes you or makes fun of you if you are an abstinent. This is the reason that the vast majority consumes intoxicants and is quickly seduced by a sense of goodwill, fun and acceptance by the group. I also observe a similar pattern in adults. There is always someone in the group who drinks a lot, who keeps ordering new “rounds” and refills drinks. Few are so self-disciplined that after a glass or two they say “I’ve had enough”. Most play along and enjoy a fourth and a fifth glass of beer. 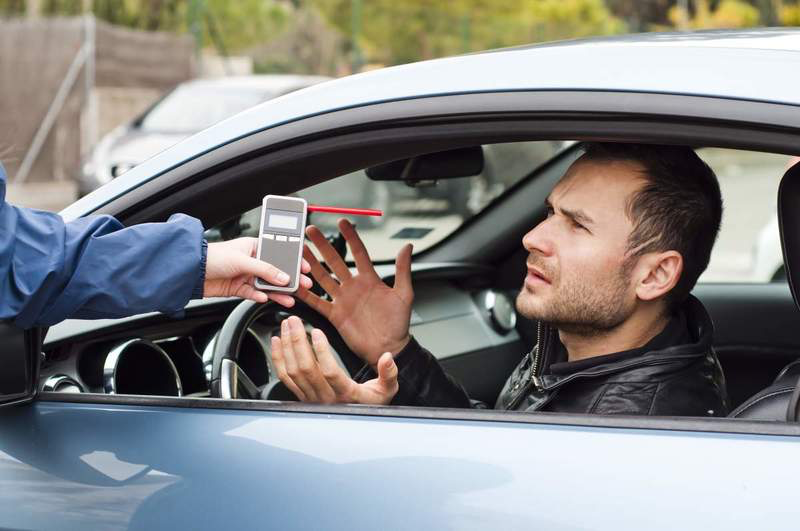 In Slovenia, up to 0.24mg of alcohol per litre of breath or up to 0.50mg of alcohol per kilogram of blood is tolerated in traffic. Therefore, if the breath alcohol test shows a result of 0.5mg/l, you have exceeded the permitted level by more than 100%. This is good to know, as many people get upset if their result shows less than 0.5 and are fined nonetheless. It should be noted that the law does not provide for absolute tolerance. Even if the result is lower than the limit value, but the individual is visibly drunk and weaving all over the road, the police officer can rightfully fine or punish them.

The fine for refusing to take a breath alcohol test is EUR 1,200 and 18 penalty points, 6–12 hours of detention and a driving ban, so we strongly advise against this option.

We cannot assess our own state of intoxication well, as under the influence of alcohol our judgment and criticism drop drastically. We only become aware that we are intoxicated when obvious signs such as speech problems, unsteady walk and slightly blurred vision appear, which means that our level of intoxication is already quite high. The risk increases with each sip of alcohol as alcohol primarily reduces our ability to judge, predict, make decisions, and also prolongs reaction time, which is crucial in critical situations. A common excuse we hear in a bar on a Friday night is “Oh, my home is very close!” or “I’d find home with my eyes closed”. That may all be true, but what good does it do if we are not able to assess well and react in a critical situation? Most alcohol-related traffic accidents occur between 3km and 10km from the starting point of the drive, so the short distance from the bar to the home does not play a significant role. 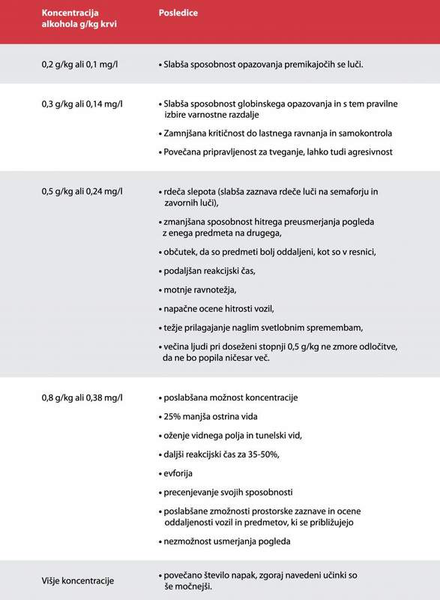 Source: The problematic of alcohol in traffic (AVP, February 2015)

Okay then! How many glasses is that?

Research by the WHO (World Health organisation) in 2010 shows that the most popular alcoholic beverages in Slovenia are wine (46.9%) and beer (44.5%), which is not shocking, but shocking are the results of how much we can actually drink in order not to exceed the tolerated level of alcohol intoxication to participate in road traffic.

A man with 80kg of body weight (56kg of liquid) drank two large beers (1 litre), which is 40g of alcohol. 40g of alcohol divided by 56kg of liquid in which this alcohol is distributed shall be 0.71g of alcohol/kg of blood. The legal limit for drivers is 0.5g/kg and or beginner drivers 0.0g/kg. A fine of EUR 600 and 8 penalty points follows.

Let's see how much wine and beer can be consumed by a man and a woman, average size, 30 years old, in order not to exceed the tolerated degree of alcohol intoxication for traffic participation. 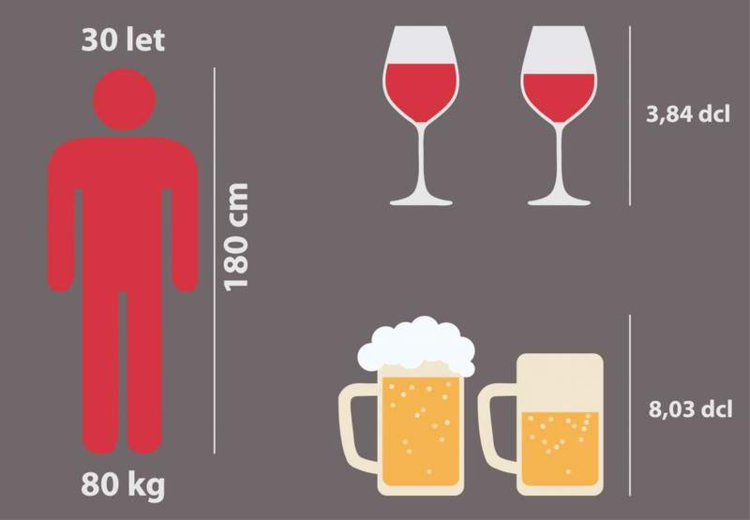 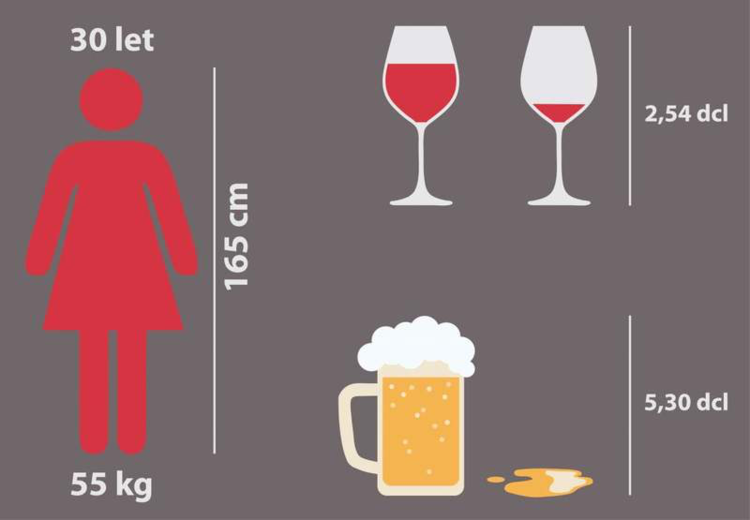 At this point, it should of course be considered that in a person who consumes alcohol 2- to 3-times a week, and in a person, who consumes alcohol 2- to 3-times a year, the blood alcohol level will be the same, but the impact on the body will be different, so we should not rely on robotic calculations as these are merely orientation values. I know for myself that after one glass of wine, I am not in a good position to sit behind the steering wheel, even though I do not exceed the threshold values. I admit, I drink alcohol on rare occasions only, I do not weave all over the road after having a glass of wine, but I am aware that my functions are slower than usual and I dare not risk myself or my family having consequences because of one party. I also don’t want to be responsible for light, serious or fatal consequences of driving under the influence of alcohol.

From the other point of view

The question is, are we missing anything by being sober? If yes, then the problem is within ourselves because we don’t know how to relax without alcohol. If we drink because others drink, we do not differ much from the quadrupeds mentioned at the beginning of the blog. Can you imagine causing a fatal car accident by driving under the influence of alcohol? Would you be able to forgive yourself? The answer is clear – of course not. Can you imagine the police ringing your door bell in the middle of the night and telling you that your child was seriously injured in a car accident due to the driver being drunk? Probably not, because we always believe something like this cannot happen to us. But it can! Anytime.

Let’s be smart, use our heads and contribute to greater road safety.

6 steps to the driving licence exam

Top 10 skills of the future 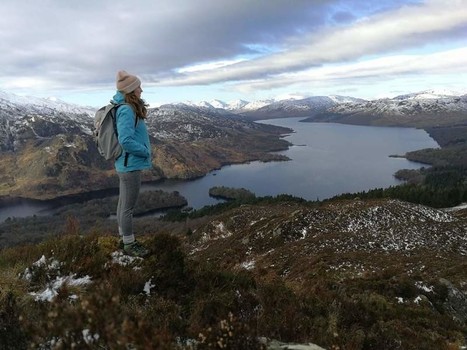 Via Erasmus to Scotland

Living alone for two months in an unknown country, 2.5 hours of a plane ride away from your family and friends does not sound very good at first. However, you must also consider all the good things this kind of opportunity brings. Firstly: A n...
LEARN MORE